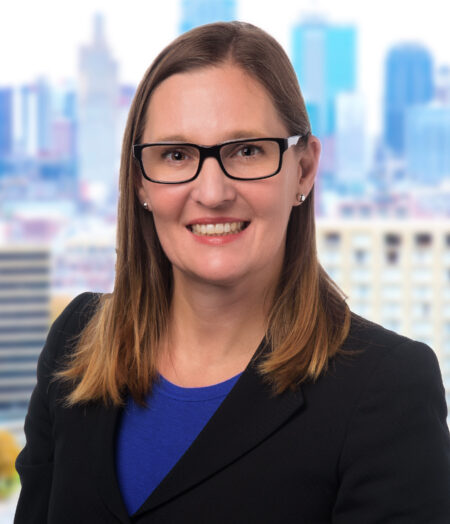 Jennifer Wieland handles complex litigation matters for businesses and individual clients. Her practice is primarily in federal court, where she focuses on commercial disputes and employment and intellectual property matters. She represents clients from all sectors, including the financial services and automotive industries, from small, local businesses to Fortune 500 companies.

When Jennifer takes on a case, she invests the time to learn about her client’s business, to understand the facts, and to analyze and anticipate the legal issues. This hands-on approach has helped her resolve many disputes before litigation is even filed. She also has won cases around the country based on her written work including in state and federal courts in Kansas, Missouri, California, Illinois, and Florida.

Jennifer is a former federal law clerk who worked on both coasts before settling in Kansas City. Her first job out of college was as a paralegal at Covington & Burling in Washington, DC. She later served as a law clerk to the Hon. Lourdes G. Baird in the Central District of California in Los Angeles. Following her clerkship, she worked in the Orange County, CA office of Latham & Watkins. She relocated to the Kansas City area in 2005, where she spent three years as an attorney at Blackwell Sanders before joining Berkowitz Oliver in 2008.

Jennifer is a Double Hoo, having received both her undergraduate and law degrees from the University of Virginia. While attending UVA Law, she was both an Executive Editor of the Virginia Law Review and a founding member and Executive Editor of the Virginia Sports & Entertainment Law Journal. Jennifer’s Note “Death of Publius: Toward a World Without Anonymous Speech” was published in the Virginia Journal of Law & Politics and has been cited in an amicus brief presented to the United States Supreme Court, as well as over a dozen law review articles.

Outside the office, Jennifer – a mother of three – can usually be found with a skein of yarn in her hands, often on the sidelines of a soccer game.